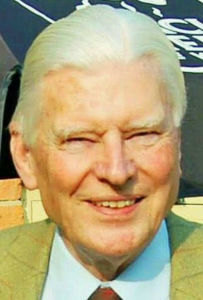 It is with great sadness that we must announce the passing of Christopher James –  Past President, Birmingham Law Society (1983-84).

Christopher was born on the 20th March 1932, to John Thomas Walters James, MC and Cicely Hilda James. He married Elizabeth Marion Cicely Thomson in 1958, and they had one son and one daughter.

Christopher was educated at Clifton College in Bristol, and later went on to study at Magdalene College, Cambridge. He served in the Royal Air force as a Lieutenant from 1951 to 1952, and in the TA from 1952-1960.

In his spare time, he enjoyed photography, railways, trying to get the better of his computer and water colour painting.